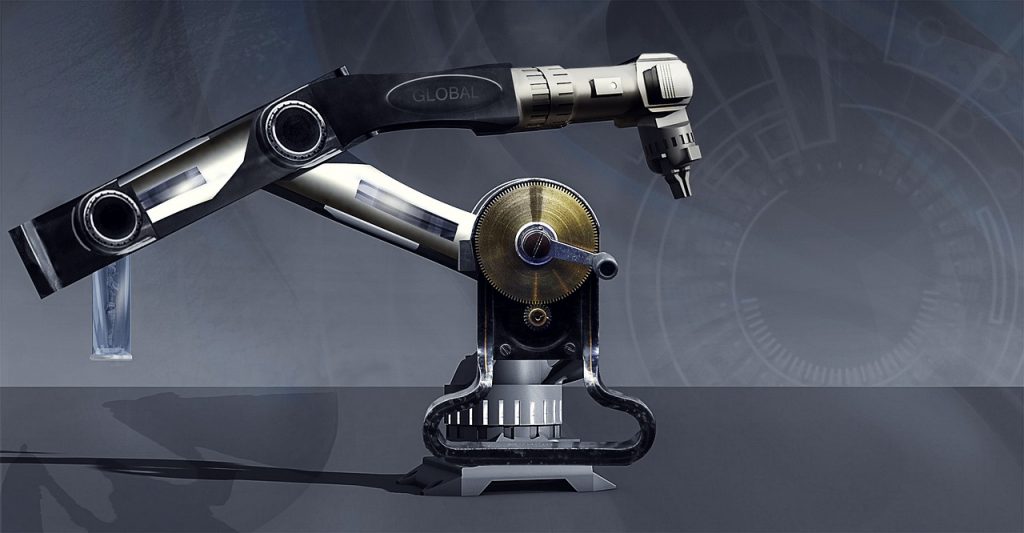 AI and Industrial Automation: Don’t Count the Incumbents Out!

Earlier this month an article in the Financial Times by John Thornhill, the paper’s innovation editor, caught my attention. Thornhill was relaying an intriguing set of ideas expressed by the authors of a new book, What To Do When Machines Do Everything?

Before discussing the future impact of today’s unfolding industrial innovations such as driverless cars, robotic surgery, precision agriculture, or automated beer service (as in the photo above), the three authors – Malcolm Frank, Paul Roehrig, and Ben Pring – make their first key point, citing the example of an early 19th century innovation that enabled an entire industry that generates $620bn. in annual revenues today. What could this invention have been – The steam engine? The airplane? The sewing machine? Or maybe the telephone? Theoretically, you might expect not be too far off with any one of these answers, but in fact the invention in question was … the lawnmower.

How could the lawnmower possibly have been so significant, you may well ask? Well, as Messrs. Frank, Roehrig and Pring (to whom I’ll refer as FR&P from now on) inform us, lawnmowers enabled the uniform cutting of grass to create lawns and, perhaps more significantly, playing fields. Over time, this innovation led to the growth of field sports such as rugby, soccer, cricket, and even American football, each with their own set of defined rules. Thus, the authors FR&P make the claim that: “The lawnmower is the foundation upon which the sports industry is built”.

The main point that FR&P are making with this story is that technological breakthroughs often lead to wholly unforeseeable consequences – something they refer to as the “Budding Effect”, in memory of Edwin Budding, the inventor of said lawnmower. It’s a quaint piece of historical detail to learn that Budding sold his 1830 invention to the Regent’s Park Zoological Garden a few years later, never suspecting how revolutionary it would prove to be.

As Thornhill asks, “What new ‘playing fields’ will be created by the immensely more powerful digital lawnmowers of today, such as artificial intelligence and big data? We can only dream of what new products, services, and businesses can be built off this technology.” It’s worth remembering firstly how often new technologies find acceptance in unexpected “niche” applications. I use this term in a complimentary sense, as opposed to the market-limiting criticism that venture capitalists and other investors often aim at the concept.

For example, the first category of battery-powered electric vehicles introduced several decades ago plunged straight into the chasm and re-surfaced years later in the form of golf carts, milk or postal delivery vans, airport conveyances for disabled or elderly passengers, and other such niche use cases. Originally, the inventors expected them to be adopted as mass transit vehicles. But the R&D required to refine this innovation petered out after the category initially crashed, so these early EVs got stuck as slow, kludgy vehicles used only for local or slow-moving transit use. More recent iterations of EVs, which have gradually enabled more ambitious applications in consumer, commercial and industrial transport now move faster, save significant amounts of fossil fuels, and avoid pollution. These include public sector uses cases such as municipal buses and trams, refuse trucks, and high-speed trains, and private sector niches including taxis, private cars – many available as hybrids as well as pure EVs.

Another technology category, artificial Intelligence (AI), has been in the penalty box for fifty or so years since the first version of it promised an array of sci-fi applications that were gradually debunked partly because many of the component technologies were unavailable or immature. Now, re-introduced by Google and other consumer internet giants and B2B tech companies, AI is a re-invigorated, even super-hyped, category that has quickly overlapped with other recently hyped categories including IoT (Internet of Things), big data and more advanced forms of analytics – predictive, behavioral, and cognitive. Thornhill goes on to highlight two other key points that FR&P make in their book. “The first is that machines will enable us to do far more than is humanly possible. AI can enhance what we are capable of doing in ways we are only just beginning to understand. For sure, new jobs are going to be destroyed in the Second Machine Age, but tantalizing new opportunities will also be created. We should hurry up and figure out what they might be.”

I don’t think this idea is particularly revealing, but the next one got my attention: put simply, FR&P state that “in many industries the real winners of the digital revolution are likely to be the incumbents, who adapt fast enough, rather than the insurgents, who are trying to reinvent the world. Those companies that can figure out how to leverage their deep industry knowledge with the power of machines will bring about ‘the revenge of the 100-year firm’”. To me, this argument is not only compelling but somewhat contrarian – not necessarily a bad thing. Today, I’m sure most observers would bet on the tech giants to get there first. But, as is occurring with the current hype around autonomous vehicles, the only “tech” company that is already making autonomous driving widespread among its customers is Tesla.

Autonomous capabilities are an integral part of Tesla’s strategy to re-imagine the car as a software-enabled mobile device designed to make motorists’ lives easier and the driving experience much more satisfying. Tesla took full advantage of not having a franchise in ICE vehicles to design the ultimate driving experience. But such depth of customer-in thinking is unusual in tech companies. Apart from Tesla, Google and Uber are still focused on technology and patent issues, and they’ve barely started to deal with the regulatory requirements. Thornhill quotes Kevin Kelly, author and founder of Wired magazine, as suggesting that “the business plans of the next 10,000 Silicon Valley start-ups will be: ‘Take X and apply AI.’”

In the tech world, industry domain expertise is the single most neglected (or absent) capability while the obsession with making “a great product” consumes most of a typical tech company’s oxygen and thus resources. Especially when a tech company aims to transform an entire industry, domain expertise involves deep knowledge in at least three crucial areas. The first one is the competitive strategy, business model and partner ecoystem (or value chain) of your target customers; second, their operations, core business processes, and organizational structure; and third, the regulatory environment in which they customers operate – this last factor often being one that trips up technology entrants, as we’re witnessing on a daily basis with Uber and, to a slightly lesser extent, Airbnb.

Today, captive professional services organizations within enterprise tech companies are still required to focus too much of their resources on basic implementation – getting customers up and running. Instead they should be resourced to spend more time really understanding their customers’ strategies and processes, and how to make them more streamlined and effective; and understanding the impact of government regulations and security issues in order to help make customers’ product and service offerings more relevant and productive to their end-consumers and business customers. It would help enormously if investors, especially VC and PE firms, could understand that the right kind of high-value professional services are crucial to the success of tech companies that are taking direct aim at established industries – some of them insourced and some outsourced through different kinds of alliance with dedicated industry-specific proserv firms.

Hence the idea that incumbent automotive and other industrial companies could beat the techies to the draw. How? Well, to begin with, these organizations have intrinsic domain expertise in their industrial processes and workflows. Ford and GM constantly refine their design, assembly, and marketing processes, Boeing and Airbus know intimately how to build and maintain passenger airliners and continually exploit new technologies for greater economies (such as with Boeing’s Dreamliner), and GE and Siemens know how to design, build and operate power stations and oil pipelines and today are aggressively investing in IoT and AI.

Since these behemoths are accustomed to applying the techniques of continuous improvement to their operations, they should know where first to apply the big data, analytics, and artificial intelligence tools to obtain results in terms of faster time-to-market, prompt customer service, and so on, and most are already doing so. That said, it is well known that large, established companies are too often hampered by their own “innovator’s dilemma”. In other words, they find it extremely hard to risk cannibalizing their existing franchise(s) in order to focus (at the right time) on major new growth opportunities that may represent their future despite disrupting portions of today’s business.

One tactic recommended by FR&P is for incumbent companies to “challenge their millennial employees to figure out lower-cost ways of exploiting modern technologies” to identify the most suitable use cases to implement. I would go further and make sure to promote millenials into senior executive roles. Let’s face it, millenials are now aged between 35-45 or so. Large companies should have a decent pool of promising leaders with sufficient experience to take on executive leadership roles, even at the cost of bypassing older collegues.

To summarize, incumbents need first to start looking at their business somewhat like how a Tesla-style disrupter would look at them, in particular substituting the normal company-out mindset for profound customer-in thinking; secondly, they should challenge their executives and managers to figure out how to take advantage of disruptive new technologies early in order to streamline processes such as new product introduction (manufacturers) or claims (insurers); and lastly but not least importantly, they should consider how to leverage their deep domain industry expertise to craft solutions to their customers’ critical problems, including regulatory hurdles – before the tech disruptors eventually figure it out.

Fortunately for most industries, there isn’t a Tesla (in automotive) or Amazon (in retail) that has developed a comprehensive, industry-expert approach to transforming their business. So companies such as John Deere in agribusiness (now moving quickly toward technology-enabled precision agriculture), Caterpillar in construction and mining, Scania in heavy trucks and buses, Bechtel in heavy engineering and construction, and BP in oil and gas exploration and distribution, have a field of opportunity to disrupt their busines before a pure tech company does it for (or to) them.

In contrast, tech companies who think they are going to disrupt specific industries need to try to think like their customers: diagnose before prescribing, develop an advisory playbook with the assistance of business consulting partners to delve into core business processes, and build a professional services cadre that can go toe to toe with their customer’s executives on addressing problems that matter. An additional strategy is to form joint ventures with groups of target customers, and partner extensively with domain-expert service organizations for resources and knowhow that they don’t themselves have.

Author’s Note: This article borrows heavily from a book review by John Thornhill, the Financial Times’ innovation editor, published on May 7th, 2017. The reviewed book, “What To Do When Machines Do Everything?” by Malcolm Frank, Paul Roehrig and Ben Pring, is published by John Wiley & Sons, Copyright 2017.